Reflecting On An Amazing 2016 Season 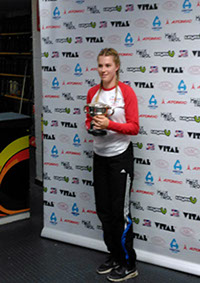 Posted at 10:55h in Sponsorship by Gresham Power

The last dryslope race for 2016 was the Irish Champs in Dublin at the beginning of October and Nicole has had plenty of time to reflect and evaluate her season.  The final Outdoor and Indoor British Artificial Seeding System (OBARTS) and  (IBARTS)  was issued on the 27th November 2016. These documents show all racers that are registered with Snowsport England and what their current seed points are at the end of the 2016 season.  Zero seed points being the top racer for that season.

Nicole finished with 2.32 points for outdoor, which means she was the 2nd most successful female overall in 2016.  For indoor, her points were 19.97 and came 3rd overall.  Only a handful of females podium in both outdoor and indoor races, most concentration on just one surface, so this an amazing achievement and for someone being so young.

The titles she won were:

Nicole was also awarded the Ann Bates Cup for most improved racer in 2016 and another highlight of her year was being recognised and given the role as an England Ambassador.

Nicole could not have achieved these great results without the continued support and sponsorship from Gresham, for which she was very grateful as too were Lois and Paul, Nicole’s parents.