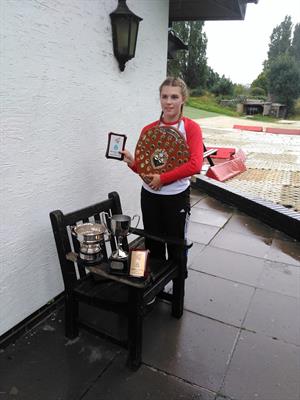 Posted at 16:12h in Sponsorship by Gresham Power

The dry slope calendar slowed down during the month of August, so Nicole was able to enjoy the sunshine and have some down time as well as receiving her GCSE results! The All England Champs is one of the biggest prizes on the artificial ski circuit. Gloucester is a challenging slope due to its length and bumpy terrain and the rain added to the occasion. With a field of 50 females, going in reverse bib order, Nicole was drawn bib 14 and one of the first top 15 seeded racers to tackle the first run, so all eyes were on her to see how she coped with the difficult course. She had a good clean run and after all racers had negotiated it, she was 3rd overall on the scoreboard. The 2nd course was a more technical with offset and diagonal gates. Run 2 was in reverse time order so Nicole had plenty of racers to watch and see where mistakes were made. With a good top section with great aggression, Nicole had an impressive time and had to wait and see how the fastest two competitors skied the course. With both runs counting and times combined Nicole improved on a place and took 2nd fastest female overall, so she was very pleased with her performance. 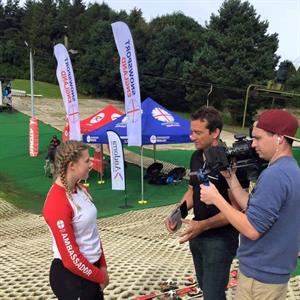 Sunday’s saw the All England Inter Club team event. Nicole and three other racers represented Team Snowtrax, but unfortunately did not get past the league stages. The highlight however was meeting Graham Bell (Ex GB ski racer) and presenter of Ski Sunday. Nicole was one of the athletes interviewed by him, talking about her England Ambassador role and grass root dry slope skiing. The program will be shown sometime towards the end of the year.

Nicole came away with quite a haul of silverware on this day, trophies and cups for 1st U18 female, 2nd fastest female overall, The Ann Bates Memorial Cup awarded to the most improved female racer for 2016. Also presentation for the GBR outdoor series – Nicole 1st U18 and took 2nd spot overall. Nicole has a busy rest of September and October. The next weekend is at Pontypool.